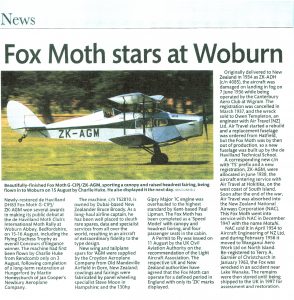 ZK-ANL is on the move again. The first time I saw ANL, complete with spraying gear, was in 1980 I was visiting my old friend Temple Martin, (Mr Moth) at Bridge Pa and ANL was parked out front of the Club rooms.

Standing on the front seat, refueling the said aircraft, from a petrol can, was a white haired old gentleman, namely Hap Neville.

Temple told me Hap was using it for spraying and that it was the last Tiger Moth in New Zealand still working. Not long after that Hap stopped flying and ANL was sold to someone in Napier.

Since then ANL has moved around quite a bit, but it has now been bought by Wayne Greaves, (Biggles) and his son Shane and is going to reside in Gisborne.

Wayne is well known to many of us in the NZ Tiger Moth club and was a one time owner of ZK-BAL many years ago.

Wayne tells us that Shane’s Tiger Moth ZK-AQC which he has been diligently working on for a few years, is ready for covering, another Tiger back from the dead, well done.